After the political upheavals in the early 90s and change of political and economic system, new regional authorities were reestablished on the ashes of the dissolved ones.

Tomsk regional lawmakers had practically no forerunners. Work experience of the former Regional Council suggested only an organization form of the Oblast legislative authority, providing no content of the required laws, though.

In May 1994, the Duma work procedures and regulations, the structure of its standing Committees – Legal, Budgetary and Financial and Control ones – were adopted. In July 1995, the official name for the regional legislative body was accepted – the Tomsk Oblast State Duma. 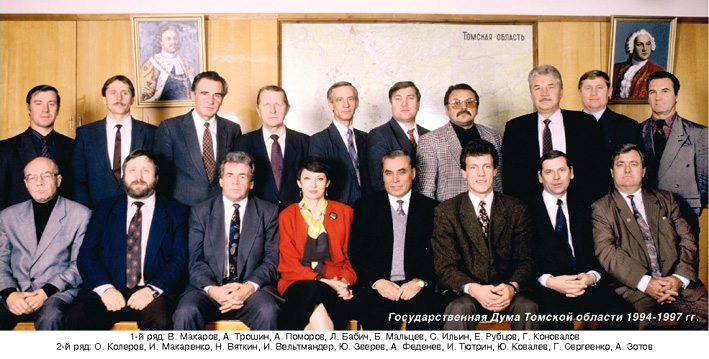 The deputies of the First Convocation had to work in virtually “zero legislation” conditions. In fact, there was almost no legislation system.

The lawmakers faced a very important task. They had to develop and adopt fundamental laws providing functioning of the region management system in new life conditions of the society, such as the Oblast Charter, laws on election of regional and municipal administration heads, deputies of all levels, and a number of laws focused on the reform of the Oblast economy and social development, rules of community living in those new conditions.

The deputies of the First Convocation developed bills which then became fundamental and set the rules in various spheres of life.

The fact that the Charter has had no profound changes so far indicates that the basis is steady – the balance between the executive and legislative authorities is kept – none is superior to another. The Oblast Charter clearly delineates functions and authorities both of executive and legislative powers. This promotes normal political climate, mutual respect of two branches and their good performance. From a legal standpoint, the document was perfect. The Tomsk Oblast Charter was highly commended in Russia and abroad. It is one of a few charters translated into English as an example of efficiency of Russian democracy.

The first Duma took a decisive step in regulation of the budget process. A large set of laws was adopted which regulate financial and economic sphere of the Oblast.

In spring 1997, Tomsk deputies passed the law on the coat-of-arms and flag of the region. A multi-month work on creation of the Oblast symbols with the invited artists, historians, clergymen and other public members was completed.

Since the First Convocation the Duma has practiced such form of deputy activity as parliament proceedings. Generally, priority areas of the Oblast development are brought up for discussion: issues of forest industry development, banking activity, reformation of the regional economy, social security of the population, law and order, etc. The proceedings are attended by heads of institutions, companies and organizations, researchers, lawyers, public members. This form enables study and consideration of problems from various industries in the Oblast laws. 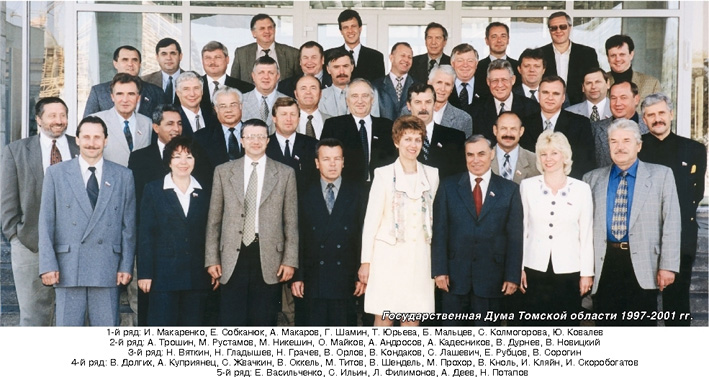 In December 1997, elections of the Second Convocation of the State Duma of Tomsk Oblast took place again by majority voting but that time involving double-member constituency system. As a result, the number of deputies doubled and totaled 42.

The Duma continued shaping the legal framework for nation-building, local government, and administrative-territorial structure of Tomsk Oblast. At the same time electoral legislation was being improved. Particular attention was paid to statutory regulation of social relations and provision of social security coverage for the residents of Tomsk Oblast.

The Second Convocation was called the ‘Economic’ Convocation because that was the time when the Duma adopted the majority of laws providing assistance to business activity, improving tax regulatory and legal frameworks, stimulating rural development.

The Second and further Convocations of the Duma consisting of a larger number of deputies were able to handle more and more complex issues. The Duma established and maintained strong ties with the Oblast Administration successfully working together as a team over the issues related to the regional economy, development of the real economy sector, namely, regional industry, transport, agriculture. 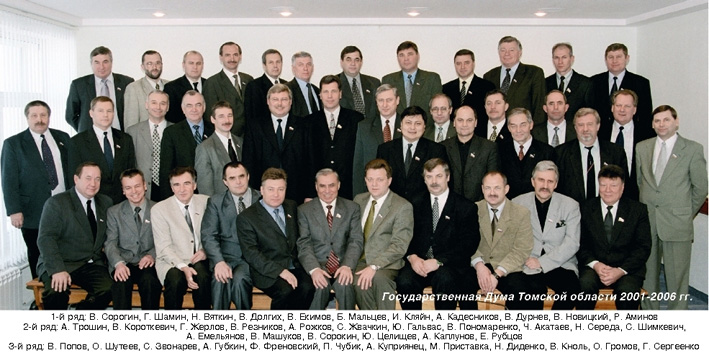 Elected in December 2001, the Third Convocation of the Tomsk Oblast State Duma consisted again of 42 deputies who were elected in 21 double-mandate constituencies.

The Third Convocation started their work in relatively stable economic conditions and turned to social issues.

On February 21, 2002, the Control Chamber was established by a Resolution of the Tomsk Oblast State Duma. And in the first year of the Chamber activity not only were procedures developed and adopted and the activity plan approved, but also external inspection of the Oblast budget execution in the first six months of 2002 conducted. The work of the Chamber turned to be so intense and efficient that by the end of the first year of existence it seemed to have worked for several years.

In December 2002, in order to develop creative and research potential of the talented youth, the Tomsk Oblast State Duma Award was established for young researchers and young hopefuls. The age limit for candidates is 33 years. The Award currently keeps the tradition of search and support for the talented youth.

In June 2006, the Duma adopted the Law “On the Youth Parliament of Tomsk Oblast” which regulates the main goals and objectives of the Parliament’s activity as a school to train young parliamentarians. The Youth Parliament generates initiatives aimed at resolving problems of the youth, the so-called “signals from the citizens” to be worked on by the “senior” deputies.

The other 21 deputies were elected in single-member electoral districts of equal population (one district – one deputy).

When the Duma was elected, the age of the deputies ranged from 26 to 71 years.

The Duma of the 4th convocation consists of 5 female and 37 male deputies. 24 deputies worked in previous convocations of the Duma, and Nikolay Vyatkin, Boris Maltsev, and Evgeny Rubtsov have worked in all four convocations. 37 deputies work as managing directors and top managers of large enterprises, organizations, firms, and institutions.

The deputies of the 4th convocation continued working on developing a legal platform to achieve a fairer social situation and robust social security for the people of Tomsk Oblast. The deputies put a particular emphasis on the problem of housing for young families. The Duma supervised implementation of the previously adopted program for promotion of physical education and sport in Tomsk Oblast, and monitored spending under the program. The Law of Tomsk Oblast “On the national youth policy in Tomsk Oblast” was developed and adopted after a parliamentary hearing.

The deputies continued improving the legislation on civil society institutions. The Tomsk Oblast Laws “On guaranteeing equality of political parties represented in the Legislative Duma of Tomsk Oblast when their activity is covered by the regional television and radio channels” and “On providing access to the information on the activity of the public bodies of Tomsk Oblast” were adopted. The deputies adopted the Tomsk Oblast Law “On the Ombudsman for Children in Tomsk Oblast” and, for the first time in the history of the Duma, appointed ombudsmen at a Duma session at the end of 2010.

The Legislative Duma of Tomsk Oblast of the 4th convocation has actively and devotedly worked on creation of a regional regulatory framework which would support further socioeconomic development of Tomsk Oblast.

The legislative experience of the Legislative Duma of Tomsk Oblast is often used by the federal law-makers and legislatures in other constituent entities of the Russian Federation.

The Legislative Duma of Tomsk Oblast is approaching the forthcoming elections with a robust regulatory framework which is vital for the development of Tomsk Oblast.

The first session of the Legislative Duma of Tomsk Oblast of the 5th convocation took place on December 20, 2011.

Credentials of the deputies of the Legislative Duma of Tomsk Oblast of the 5th convocation were ratified at the first session.

At the same session the Duma elected Oksana Kozlovskaya Speaker of the Legislative Duma of Tomsk Oblast of the 5th convocation.

The Duma of the 5th convocation represents a variety of social groups, professions, political views, experience and age groups.

For information on the activity of the Duma please refer to the News page.