39 people were awarded the Prize of the Legislative Duma of Tomsk Oblast for Young Scientists and Young Talents 2016. Their names were made known during the award ceremony held under the slogan "Unique Talent" this year. 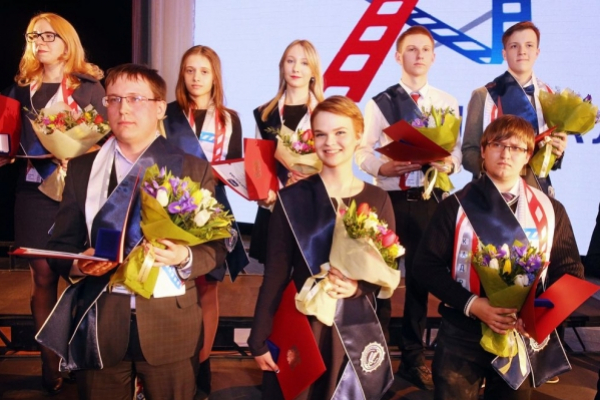 "We are proud that the competition for the Prize of the Legislative Duma of Tomsk Oblast is as independent as possible, and lobbying for someone's interests won't work here," said speaker Oksana Kozlovskaya when opening the award ceremony. "It's not a contest of individual projects or works. As a whole, it evaluates the scientific portfolio of anyone interested in participating. It's a contest that enables people or children to evaluate what they've done over the year, what achievements they can take pride in for themselves, their school or university, or friends and relatives. In our opinion, every single participant in this contest is an accomplished individual who has succeeded in something admirable, regardless of their age."

The Duma Contest for Young Scientists and Young Talent is being held this year for the 14th time. In 2016, there were 315 participants. The Young Talents prize, as usual, had the greatest number of participants – 123 – the youngest of whom were in fourth grade.

There were 21 winners in the Young Talent category. The Seversky Lyceum of Physics and Mathematics was the leader in terms of the number of prize winners, as four students of the lyceum won the Duma prize. Tomsk High School No. 29, Seversk High School, the Tomsk Humanities Lyceum and Lyceum of Tomsk Polytechnic University had two prize winners each. Apart from Tomsk and Seversk pupils, there were also winners from the Strezhevoy, Asinovsky and Krivosheinsky districts.

There were 3 candidates of science among the winners of that prize. The Pedagogical University and University of Architecture and Building were the leaders among educational institutions, with two winners at each.

"Technical Sciences" was the largest category. 76 people took part, including 24 candidates of science and 32 university students. Alongside the "traditional" higher educational institutions were also the V. E. Zuev Institute of Atmospheric Optics, the Institute of Strength Physics and Materials Science (both from the Siberian Branch of the Russian Academy of Science), and the Seversk Technological Institute.

64 applications were filed for the Natural Sciences prize by one doctor of science, 24 candidates of science and 16 university students. In addition to the traditional higher educational institutions, R&D institutes affiliated with the Tomsk National R&D Medical Center under the Russian Academy of Science were also represented, as well as the Institute of High Current Electronics and Institute of Strength Physics and Materials Science under the Siberian Branch of the Russian Academy of Science.